Peep: Her voice tone is in the mid range, neither super high nor super throaty. She has a varied assortment of sounds including peeps, chirps, trills, coos, and baby squawks.

Namesake: The namesake Lady Amalthea is a character in the post-modern fantasy book ‘The Last Unicorn’ by Peter S. Beagle (1968) and the movie adaptation of the same name (1982). 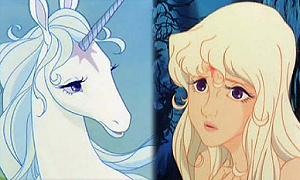 Lady Amalthea was a unicorn who, as the title suggests, was the last unicorn in the land. She goes on a quest to find out what happened to the other unicorns, and during the journey is turned into a woman by Schmendrick the Magician. The Lady Amalthea’s character develops in the story, touching on themes including the loss of innocence, love, duty, embracing the transitory, and the retention of self. The Lady Amalthea (Unicorn)’s namesake was another Amalthea or Amaltheia from Greek mythology; the foster-mother of Zeus.

I chose this name for my little Amalthea because she is by far the most cuddly and loving of the chicks and as such has won her way straight into my heart, where the Unicorn Amalthea also resides as one of several extremely meaningful fictitious characters. Additionally, she (the chick) loves being part of the human world, but still seamlessly transitions back into her flock, so this ‘living between two worlds’ is akin to the duality in the character Amalthea, in both her physical forms, as well as symbolic existences in the realms of fantastic and reality.

Hobbies: The Lady Amalthea enjoys cuddling with her human, roosting on shoulders, trying new foods, and sleeping with Mommy and the Cat in bed.

Pecking Order: Lady Amalthea is somewhere in the middle of the pecking order. She challenges her sisters more often than some of the other ladies, and seems motivated to work her way up the ladder.

Bio: Little Lady Amalthea was the first to really make an impression on me as a personality that stood out very different than the rest. She immediately took to me and in the entire time she’s been here has continued to enjoy human contact as much as she enjoys being with her sisters. From Day 2, she has been the first to jump into my hand when I stick it down in the brooder, and now that she’s flying, she’s more often than not, her ‘hop’ has turned into a ‘squat and launch’ onto my arm, shoulder, or any other part that she deems roostable.

She is ballsey and inquisitive, and while the entire group is curious, she is usually one of the first few to investigate new things. She’s mid-sized compared to her sisters, but her personality in the flock is one of the largest, making her presence and status known, and showing ambition to move up the chain of command. Despite this ambition she is, like all her sisters, gentle and loving, a trait I hope continues in all of them as they mature.

Lady Amalthea absolutely loves being handled and pet, and will happily roost wherever she can on a human. Her favorite place to be pet is down her back, from her shoulders to her tail, and if you catch her in the right mood, she will let off soft trills and chirps to show appreciation.

Amalthea has an uncanny sense of how to interact with a human in the most enjoyable way, and has never shown any desire to peck at facial features like lips, nostrils, and teeth. She also generally tends not to poop on you, and when she needs to she will get restless and chirpy, which if you are watching her closely will allow you to scoot a paper towel under her or hold her over a proper receptacle so she can relieve herself. These behaviors happened so naturally with her that sometimes when I look in her eyes I question if there really is a chicken in there, or if somehow she was supposed to be born into a dog or cat and accidentally tumbled into the wrong body at the last moment. In fact, the bond we formed and our interactions were some of the initial experiences I had with the chickens that opened my eyes to the complexity of their personalities and fostered my growing respect for this species.

About the Author: Farmer Mew

Sign up for a meow when there's breaking mews!